I have been neglecting my blog a bit, apologies. Before I write a proper update however, I thought it right to pay tribute to the talented musician, creative wordsmith and Scots hero, Michael Marra who I had the great privilege to meet and draw during the prestigious StAnza poetry festival back in 2007. It was indeed sad news to find out a few days ago of his passing, and it has taken me until now to find this picture of him. I have to sheepishly say I initially found him an acquired taste.  Would you believe it was actually when I was on the Janice Forsyth show back in the new year of 2007 to draw Camera Obscura live in session, when Janice suggested I must know of Michael Marra since I'd studied in Dundee.  I had to admit my ignorance as she then proceeded to open her show with Marra's 'Painters Painting Paint' and I cringed - more because of my own nerves at being referred to (I just thought I was on the show to draw, not to speak!), but also, his gravelly voice certainly wasn't a gentle introduction.  It would be nearly three months later when I would find myself actually drawing the man himself, and experiencing and drawing him live I was amazed at how his words, music and presence transported me to the places where his beautiful songs and stories came from. I was literally stunned and mightily humbled.Taken far too young, he will be sadly missed
. RIP Michael Marra, a true Scottish creative legend. Here's the song 'Frida Kahlo's Visit to the Taybridge Bar' of which one of the lyrics are written into this picture, and if you don't know it, it's set in a pub in Dundee, where I also went to art school - in the city, not the pub :) 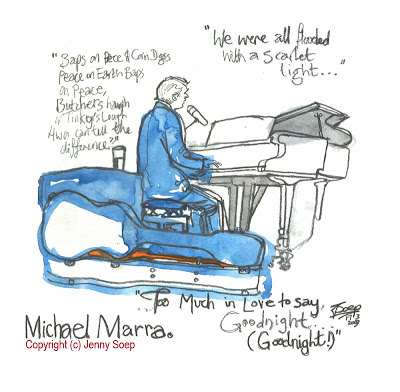