Hanif Kureishi - What his ideas do to his head


So here it is, the weather being ruddy awful at 2:09 in the morning. It's Friday, no wait, it's Saturday, and I should be out getting pissed and partying my ass off like all normal teenagers...But hang on, I'm not a teenager any more, at least not the last time I checked... I'm 28 going on 112. 'Over the Hill' doesn't even cut it; try 'Desperately Down and Lost in the Windy Wet Valley'...

Seriously though, I've only got goose pimples because I'm in my checked jammies and sitting in the path of the whizzing dog flap. Minus 'fat dog' to get stuck in it and stop the draught.

So what would keep me up till this hour I ask ye? Well, after a varied day, I had an enjoyably varied evening too, composed of a very fine 'question asking and answering' session, followed by a mighty Slamming of Poetry. Aye Write (forgive me, I keep trying to spell it the 'Right' way...) was opened tonight at the most splendid Mitchell Library with a few, I'm sure equally inspiring events, but the ones I attended (got in for free) were excellent.

Rodge Glass hosted a lovely interview with the inimitable Hanif Kureishi who gave a teaser reading of his new book 'Something to Tell You'. I'm not going to act like the literatti I'm not. This was my first encounter with any information about him, but I liked him. There was grit, ease, humour, deep thought, dark stares, acute observations and warm answers. All they needed was a pot of tea on the table, or a few sparkling G'n'T's. Very civilised, despite the naughty words. 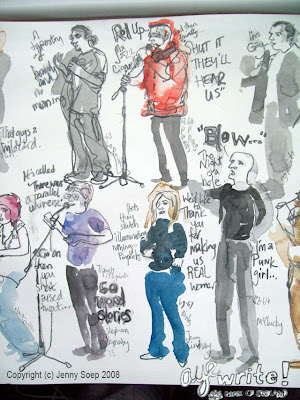 A Slice of the Slammers

And then there was the Poetry Slam. Brilliant - exhilirating, exhilerating, bloody hell how do you spell it...Anyway, a man called Graeme Hawley? won the event. A burly bruiser of a chap with big muscular arms on show in a tight white t-shirt, baggy snowboarder pants and a skin head. He looked vaguely like a beefed up Alan Cummings except his face was, em, not as 'stretched out'. And he could recite.
I was going to say read, but he knew all his own 'stuff'; he had impeccable timing, tone, rhythm, narrative, biting humour and importantly, morals. He put mucho feeling into his poems - I got the feeling he'd buffed himself up especially to amplify the tenderness of his words. 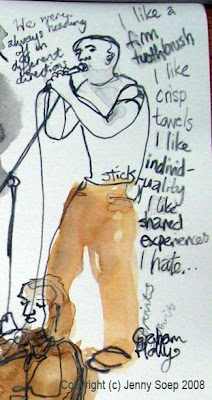 However it was a tough night out there - a lot of excellent speakers/poets/thinkers/performers/comedians and variety.

Robin Cairns was a dramatic host and certainly set the tone for some energetic sets.

A lot of girls started the comp. A good few got into the semi's but the final 3 were chaps.

Sofia (I really need to get a copy of the names!) gave excellent political rythmical well timed rantings, and I don't think it was a lack of power in her poetry, but maybe less interaction with the audience that kept her back from the finals. Jenny Lindsay had the captivated audience in the semi's, but not the confidence of her first heat.

A couple of wildcards showed great potential - a chap called David Mulheron aka The FreeStyle Master gave us his 'Schemes' which was hilarious and easy to follow once you got into his lingo. I've drawn him before - way back at Dunstaffnage Music Festival 2006 and he's in the animation of the drawings by Garry Whitton which you should be able to see on the top right hand of this blog. However, don't quite know how to edit out the other shite Utube videos that keep randomly gathering around it like something nasty...
Posted by Unknown at 18:08